shrIEEEk was my first event in the world of IEEE. shrIEEEk is the flagship event of IEEE MBCET in which the fresher batch of Mar Baselios College of Engineering & Technology, Trivandrum. This event is usually conducted right after the fresher’s day of the college. But we had to delay shrIEEEk for the batch of 2013 until now. But I’d say, that wasn’t a big wait. You’ll know why, soon.

shrIEEEk for the fresher batch of 2013 was organized by the IEEE student branch of Mar Baselios College of Engineering & Technology, Trivandrum on Saturday, February 01, 2014. shrIEEEk is one of the flagship events of IEEE MBCET which focuses on welcoming the freshers to the college and introducing IEEE to them.

In 4 years of my life at IEEE MBCET, We’ve organized 3 shrIEEEks and I’ve been a part of all of them. Participant the first time and coordinator of all the rest. And I must say this was the biggest shrIEEEk of all time; Or probably, the biggest shrIEEEk in the history of IEEE MBCET! We had an enormous participation of approximately 200 students from the 2013 batch alone. This was HUGE!

Smilu Sunny, Vice Chair, IEEE MBCET welcomed the gathering. Mr. Shibu Shajahan, Founder and first chairperson of IEEE MBCET and the Chief Guest for the day inaugurated the event by sharing his wonderful experiences with IEEE. He was able to convey the benefits of his IEEE membership in his education and career to the vibrant crowd. Even he acknowledged that the event was the largest ever!

shrIEEEk is an event all about fun and frolic. After the inauguration, Ashin E Abraham and Madhav M Nair came up with a fun and interactive game session. One participant from a team were chosen randomly and given a scene to enact. The other team members were expected to deduce the scene and join in the act. It was a new experience for the participants and gave them a new insight to the idea of co-ordination. Refreshments were also served alongside the game session.

After the game session, I introduced IEEE and the benefits of volunteering in IEEE to the participants. Miss Achala JS, Former Chairperson of IEEE MBCET and Mr Anand VR, former executive committee member shared their experiences about volunteering in IEEE and how it had benefitted them. They inspired the young crowd by giving examples of instances in their IEEE career which changed their view towards engineering.

After the talks, the main highlight of the event – “We Are Creators” was conducted. The session was an idea to bring out the true creativity and innovative minds and to improve the team skills among the participants. The task in hand was to build a model of Indian Emperor Shah Jahan’s famous Taj Mahal using only newspaper in under 30 minutes.

The session displayed active participation, brainstorming and innovation. The session was incorporated with the idea of introducing the efficiency of working as a team in achieving a particular goal. Mr Shibu Shajahan and Principal, Dr. T M George evaluated the models made by the participants. 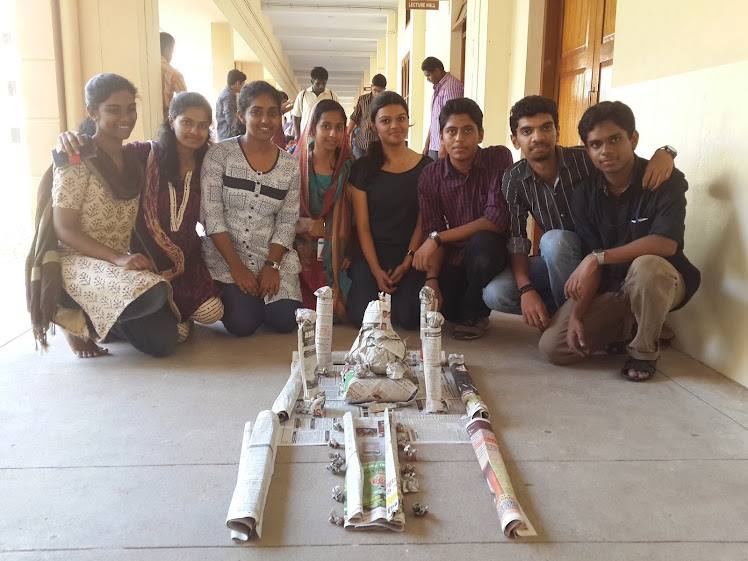 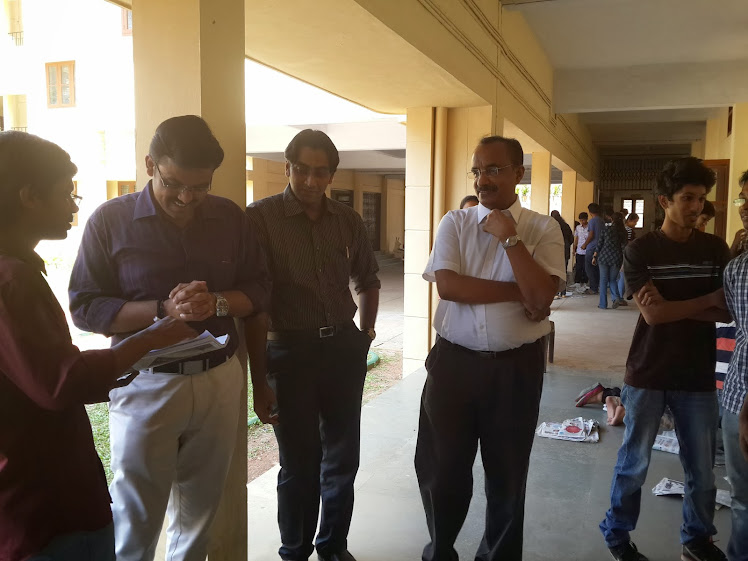 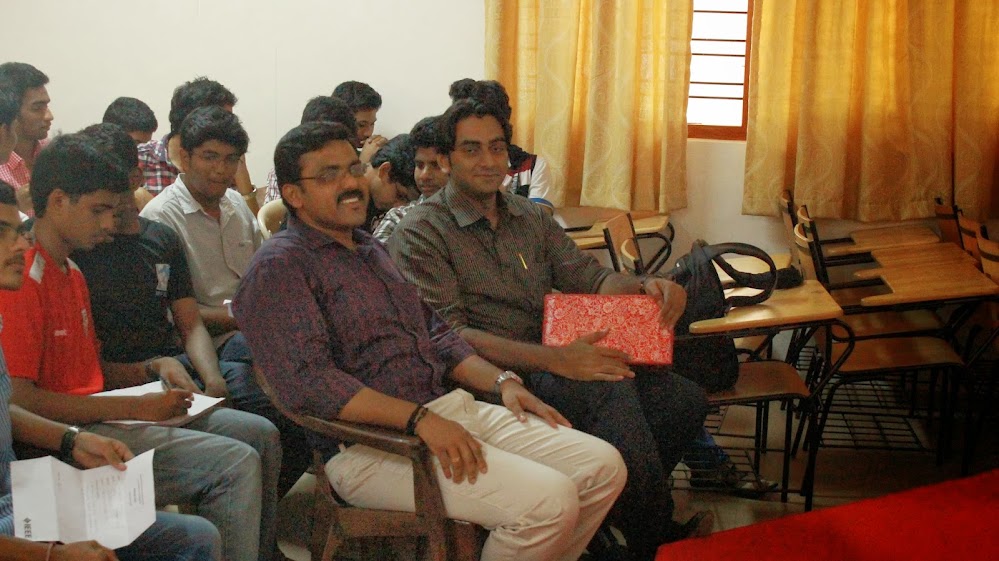 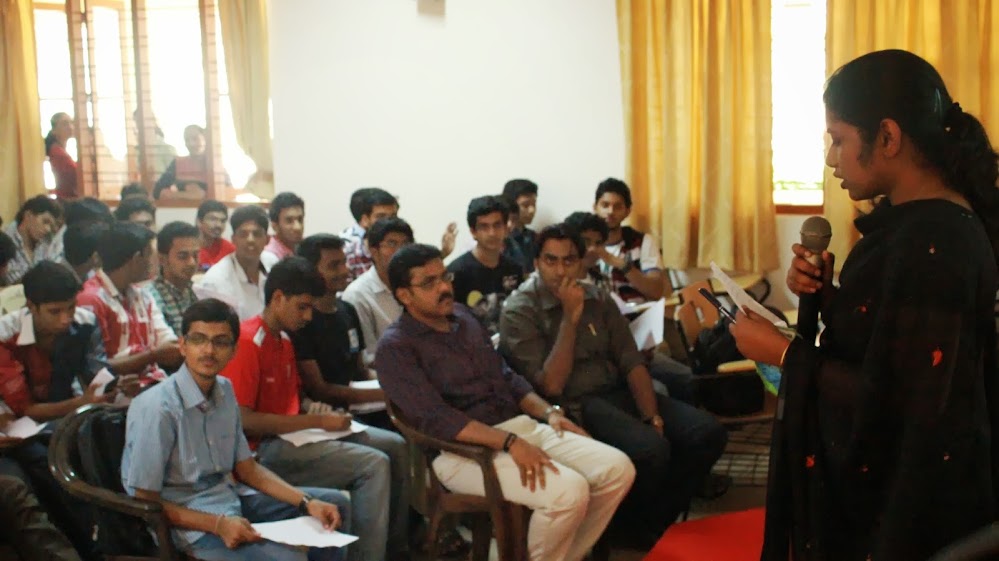 After the event, Branch Counsellor, Nandan sir gave a small talk to motivate the participate to join IEEE and volunteer for its activities. After the participants had dispersed, Mr Shibu Shajahan addressed the volunteers and appreciated their effort in organizing an event of this scale. He also reminded them that they were on the right track and all they had to do was to continue working in the same direction. He reminded his experiences in IEEE in which volunteering helped him learn many things from his peers. He urged the volunteers to continue volunteering for IEEE and its activities.

The general feedback from the participants was that they had immense fun and found the sessions to be very informative, interesting and interactive. The event would have been impossible with the few volunteers who took all the pain and effort in organizing this event. All the volunteers did a great job of handling such a massive crowd. Efforts worth mentioning are those of Smilu Sunny, Smrithi Raj, Ashin Abraham and Madhav M Nair. The event was a success with the participants going back home optimistic about joining and volunteering with IEEE.

Find more pictures of the event at : http://goo.gl/qA3tA2

This site uses Akismet to reduce spam. Learn how your comment data is processed.